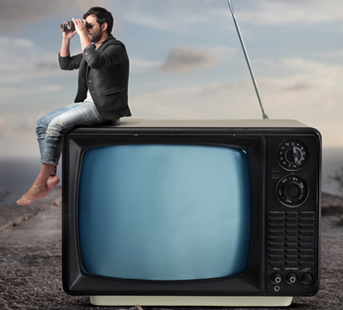 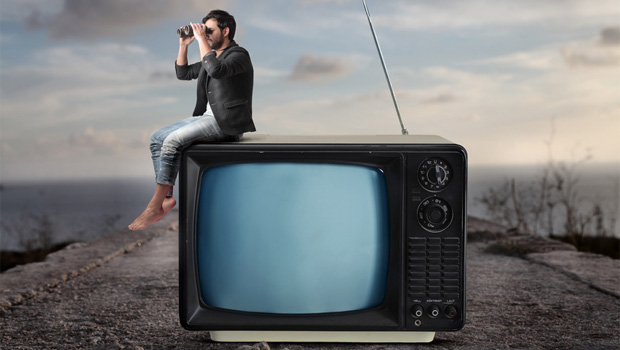 TV ad market in Moldova is on the down line for the last 2 years. Even understanding that 2016 is an “election” year and TV channels will have the opportunity to compensate a part of their loss from commercial advertising, the last is showing the real situation on the market.

To evaluate the tendencies and understand the dynamics and prospects of this market, we decided to analyze market (TV channels) commercial performances, prior to active period of political advertising placement, meaning January-August 2016.

Compared to last year period (January-August 2015), in 2016 there were minus 3,4% available inventory on market. In absolute and % for overall market we can say that there were almost no changes, but this perception changes when we analyze the numbers (volume of available wGRP) in details by TV channels and we can see some big differences in how it was and current results. 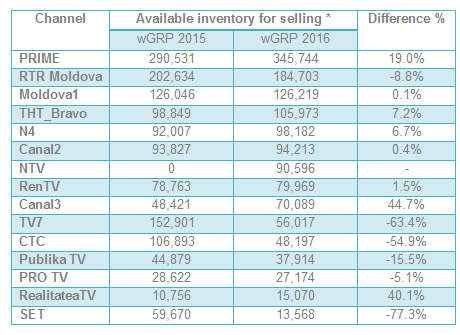 Accordingly, we can mention that PRIME TV channel, thanks to its growth of share and ratings, grew in terms of inventory availability with +19% and takes almost 25% share of entire TV ad market. Also big growth can be noticed for Canal 3 (+44,7%) and Realitatea TV (+40,1%).

Current, second biggest channel on market, RTR Moldova, decreased with 8,8% in 2016. But biggest decrease (in absolute numbers in particular) was registered by TV7, which at the beginning of the year gone through broadcasting grid updates, following the move of rebroadcasted by them НТВ, into a new TV channel. TV7 decrease to the end of August reached minus 63,4% compared to same period last year. Big minuses could be also mentioned on CTC (-54,9%), SET (77,3%) and Publika TV (-15,5%) channels.

Other channels were oscillating in the range of +/- 5-7%. НТВ channel mentioned above, which started its broadcasting on a new frequency and as a new channel in January 2016, at the end of August was in 7th place by available to be sold inventory, but as it shows a positive dynamics, it can reach a higher position till the end of the year.

Despite of the mentioned results by available (produced by channels) inventory to be sold, real sells, at the end of August shows another dynamics (which in fact shows the market situation and “health”)

Despite of total available inventory decrease with 3,4%, decrease of sold inventory volume had gone further and reached minus 8,2% compared to same period of 2015.

If to analyze by TV channels, there can be found differences, but also consistency compared to dynamics by channels available inventory. 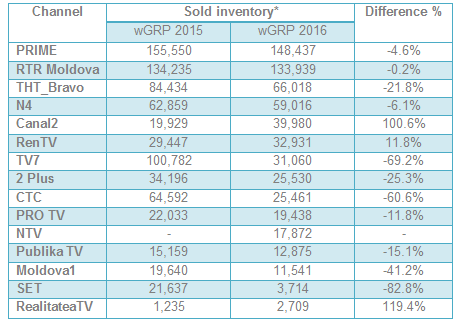 Almost all-entire market, first eight months of 2016 ended in minus.As a result, PRIME TV channel for instance, despite of its indexes growth (+19%), in inventory sold volume decreased with 4,6% (is important to mention, that in this analysis we are not counting money, but channels inventory in wGRP). Canal 3, grew in available inventory with almost 45%, but in sold inventory has doubled its last year result (which shows also the fact that last year, this channel was sold under its real possibilities). In fact, Canal 3 is the only channel to show such growth (there was registered an increase and by RenTV + 12%, also by Realitatea TV + 120%, but in absolute numbers, Realitatea shows the lowest result).

Biggest minuses could be mentioned by TV7, CTC and SET, which shown and the biggest decrease in available inventory, but the decrease in sales was even bigger. For instance, TV7, which decreased in wGRP to be sold with 63%, in sold inventory lost 69%, CTC had decreased with 55% in available inventory, but lost 69% in sold volume and the same situation for SET (-77% vs. 83%). We can only assume that this result was achieved firstly due to economical reasons, which motivated advertisers to look for a so-called “stability”. Which means, that in the period of limited resources (media investments for TV advertising), advertisers selected only channels with stable ratings, or which were growing and on channels with negative dynamics, they planned almost no activity (instead of planning a smaller share according to these channels indexes).

How TV channels worked with their potential can be tracked on the above graph, where we analyzed, in percentage, the volume of sold inventory (wGRP) divided to the available inventory by each channel. As a result, we can again mention, that best results were achieved by Canal 3, which grew in potential, but also grew in % of its sold out by wGRP. Also a better sell of their available inventory could be mentioned for RTR Moldova, Ren TV and Realitatea TV. RTR in fact sold in absolute numbers the same volume as in 2015, but due to fall of available inventory, in percentage there is an increase of their sold out. TV7, CTC and SET TV channels, as mentioned above, while decreasing in available inventory volume, have gone down even more in sold out and this is the case when the image of “falling” channel, had a higher influence on results, then the real decrease of indexes.

Not fully realized potential, which partially shows and the negative market trend, could be mentioned on TV channels PRIME, THT, N4 and Moldova1. All these channels grew in indexes, or maintained them at last year level (Moldova1), but their growth was monetized worse, even if, for instance PRIME, in absolute numbers sold only 5% less wGRP, in sold out percentage, their decrease is almost 20%. Apart of other channels, we want to pay attention to HTB channel, despite of the fact that we can’t analyze its dynamics compared to last year, results in wGRP sold out is even lower compared to other channels with approximately same indexes. This situation is motivated by the fact that during December 2015-January 2016, when the majority of TOP advertisers plans their year strategies and media activity, HTB was only in the launch process and despite its indexes by the end of the year can show a positive dynamic, a realistic assessment of their results would be possible to give only next year.

In general, the results of analyzed channels, was highly linked to each channel link to a certain sales house:

Also at this stage is important to mention, that this numbers (of channels and sales houses share), are brought by each channel so called “buying audience”, by which they are selling their inventory to the market (at the end of this article we indicated the detailed audiences by which the analysis was done). If we would analyze all the numbers by 18+ audience, by which PRIME and Canal 2 sells their inventory, then we would obviously had a bigger share of Casa Media in market sold out, but the main point to mention is that, following their growth in share, a substantially increase in sold out share haven’t been noticed.

Mentioned results by Casa Media, and such share achievement by Nova TV and Alkasar cold be motivated by lower price offered to advertisers for sold inventory, at the same time, there was an increase of exclusive deals with Casa Media, when advertising placement is done only on certain sales house channels, accordingly there was an overall decrease of price. This brings us to the fact that, the minus 8,4% in inventory sold out, could mean a minus15% decrease in real billings (money). If this tendency will remain till the end of the year, than market will lose 1,8 million euro compared to 2015 and minus 4,0 million euro, if compared to 2014 result. So in just 2 years, the market fell by a third!

The growth of internet (in penetration, formats and measurement), where is reoriented the attention of middle size and small advertisers, which more often are limited in resources and are expecting an immediate return on their media investments, will further influence the decrease of TV advertising market. At the same time, the decrease of TV viewing among young audience, will led to a decrease of interest for same volume media investment in this channel and from big spend advertisers.

In the context of economic growth stagnation, or small growth, the market prospects looks not so good and the advertisers has now to solve the issue: how in the light of interest decrease to the main media channel of last decades – Television, find a way to efficiently deliver their advertising message to maximum number of needed people, with the same volume of media investments, or even lover budgets (which is already a common practice)

(** wGRP – GrossRatingPoint, conventional units, showing, the number of TV viewers that will see the standard 30 seconds TV video commercial. As an example, we can assume that buying advertising in volume of 1 wGRP, advertiser buys its advertising message contacts with 1% of needed target audience that watch TV. Monitoring of channels ratings and wGRPs is done by AGB Moldova, based on a worldwide recognized methodology).