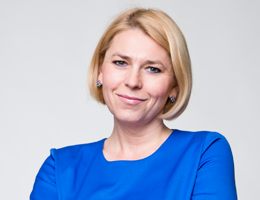 During her 3rd year at Medical University, Alla’s first job was as advertising sales agent, following a DJ position at “Radio Polidisc” in 1996.

In September 1998 began her activity in SunTV company, initially as a marketing manager, and after the launch of SunTV’s full-service agency SunInform, assigned as Deputy General Director, later on – as General Director of the agency.

At the end of 2003, accepting the invitation of the Russian company Media Arts, started her tenure in TV buying and selling business.

In 2006, Alla moved to the Publicis Groupe Media representative in Moldova, holding the position of ZenithOptimedia Executive Director.

After 2 years, as the group’s vice-CEO, she handled all PGM Moldova’s media projects, at that time renamed “VivaKi”.

Since July 2012, Alla is responsible for the entire NonTV buying for Publicis Groupe agencies (ZenithOptimedia, Starcom, Media Vest, Starlink) in Ukraine, remaining active partner of the network and CEO Vivaki in Moldova.