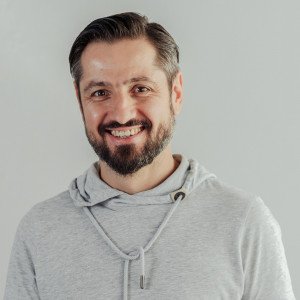 In 2002, graduates from Moldavian Academy of Economic Studies, “Marketing” section, in 2003 getting the MBA in the same place, also in “Marketing”.

In media since 2003, in position of marketing specialist in the commercial department of National Broadcaster “Teleradio Moldova”. Main projects during time at Teleradio – Obtaining the rights and organization of the first Moldova appearance at Eurovision Song Contest in 2005-2006, obtaining the rights, broadcasting organization and commercial realization of European Football Championship in 2004, obtaining the broadcasting rights for 2006 World Cup. During 2006, after Teleradio Moldova exit, was one of producers of the first Moldavian culinary show “Vedete cu sort”, broadcasted on TV 7 channel.

In December 2006, pursuing the university years dream – to work in advertising, started its activity at ZenithOptimedia Moldova, in position of media planner and account manager of Nestle. In January 2008, after 13 months of work and getting through all the positions in the agency, Dorel takes the role of ZenithOptimedia Moldova director, and holding it till July 2012. During its period at ZenithOptimedia, the Agency become one of indisputable leaders of the market and known expert in digital strategies realization and implementation.

Since July 2012 – get the promotion to Vice CEO of Vivaki in Moldova, responsible for further development all group media agencies – ZenithOptimedia, Starcom and Mediavest, and additionally in charge of Digital & Creative group direction growth.

Since January 2016 he held the position of Chief Commercial Officer, responsible for negotiating media buying with the suppliers within VivaKi Moldova group. Besides, Dorel was in charge of the commercial offers and media strategies quality control that are being submitted to the clients of our media agencies. At the same time he held the position of  CEO of Zenith agency in Moldova.

Since 1st of March, Dorel take the position of CEO of Publicis Media (former Vivaki) with an ambitious goal, while maintaining the group’s leadership in traditional media expertise, to strengthen the group’s position in the Digital Performance and Digital Content areas.